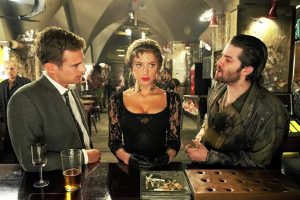 West-Byfleet-based insolvency practitioners, Gibson Hewitt, has congratulated the team behind the release of the long-delayed film adaptation of Martin Amis’ acclaimed international bestseller, London Fields, after playing a critical role in its release.

Gibson Hewitt is acting as the administrator of Nicola Six Limited, the rights holder to the film, working tirelessly to get the film on the silver screen.

Released across more than 600 cinemas in the US over the weekend, the film features an all-star cast, including Amber Heard, Jonny Depp, Theo James, Jim Sturgess and Billy Bob Thornton.

Speaking about the launch of the film, Lynn Gibson, Director at Gibson Hewitt, said: “We are absolutely delighted that the film has finally had a Hollywood premiere and release. Shot over a number of months, the hard work and dedication shown by the film’s crew and cast have been realised in a controversial adaptation of this world-famous novel.

“Having worked with solicitors and attorneys around the world to get where we are now was a massive undertaking following a complex administration and ongoing legal issues.”

London Fields was originally scheduled to premiere at the 2015 Toronto International Film Festival, but ongoing disputes with the film’s leading lady, Amber Heard, the Director Matthew Cullen and the cast, prevented it from being shown, which subsequently led to the administration of Nicola Six Limited.

Under the guidance of Lynn, the long-running disputes are being settled and her guidance and support have ensured its commercial launch this Autumn.

“It’s not every day that you get work on a Hollywood film, so we hope our work with London Fields opens new doors for us into the world of cinema and entertainment,” said Lynn.

Keep an eye out for the London premiere and release next Spring.